As I have looked into the statistics and demographics at the one, two and three million mark I'm continuing the tradition with this post.

In Sweden 44% of the population are active on Facebook. It is especially interesting to note that more and more of the Facebook users are 40+ old.

In the age group 15-64 we see that 61% of the Swedes are active on Facebook. If you had any doubt, Facebooking has for sure become a mainstream activity.

The evolution over time
The graph below show the number of Swedish users on Facebook since the 25th of October 2007: 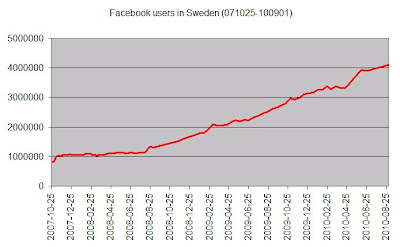 The gender distribution
Overall in Sweden 48.6% of the Swedish Facebook users are female, 45.1% are male and 6.3% have not defined their gender.

A further breakdown of the gender distribution per age group is in this graph: 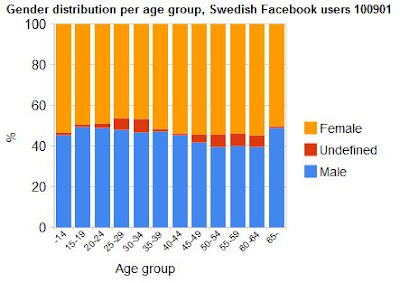 The age distribution
The penetration per age is displayed in this chart:

The 100+ percent penetration between 14 and 23 years of age probably have a number of reasons, including:
What do you think?

...and not only the youth on Facebook...
It's clear from the graph above that Facebook is used across the whole population. The penetration does not fall below 50% until the age of 42, and all the way up to the age of 60 the penetration is over 20%. 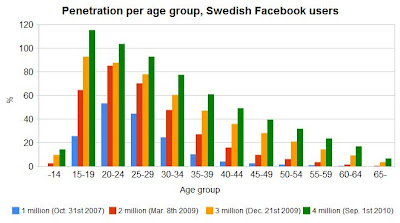 Another way to view the data is to look at the accumulated penetration as we go from the younger to the elderly: 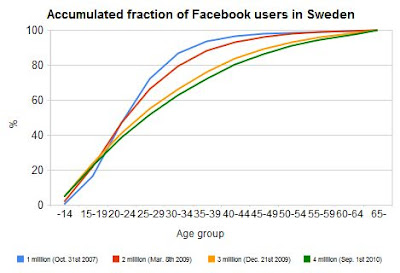 That's it for the 4 million report. Now let's see if (or when..?) Sweden reaches 5 million users on Facebook.

Any thoughts? Will the growth continue? Or will another site start to replace Facebook as "the place to hang out".

(Note 1: the number of users is measured through the Facebook advertising tool. Although it is not clearly stated what criteria is used to classify users, the best guess is that A) the tool measures active users, which probably means users that have logged in the last month and B) The nationality is to a large degree decided by looking at the IP-address range of the user.

posted by Johan Myrberger at 10:44 AM

I would think that is pretty common and that it accounts for some part of the growth (in all ages, not only those with 100%+ penetration).

It would be interesting to compare with statistics from other sources. Panel surveys that various researchers do regularly should (surely, nowadays?) include some questions on social media activity.

surely this can be expected to affect the numbers across all ages.

It would be interesting to see any numbers or surveys on how many users that maintain multiple accounts. I am not aware of any such study, let me know if you spot one!
(Sure, it's probably fairly common to include questions on "social media activity" ("Are you on Facebook"). Such questions might be of interest in various studies (even if the main topic isn't social media) as background factors. However, to drill down into more specific questions ("How many Facebook profiles do you have?") would probably only occur in studies around the topic as such...)

Of course maintaining multiple accounst is against FB TOS... And initially I tended to believe it's not that common, but perhaps it is..? Any pointers to research in this area would be interesting!

Suppose you had data from a survey that, say, once a year for a few years has been asking the question “Are you on Facebook?”. Then you could see if see those data indicate the same growth in fb-activity as the data you have been using. The question “Are you on Facebook?” would probably (but see my point below…) give rise to a yes regardless of whether a person has one or two (or even more) accounts. Therefore one might dare to attribute any differences between your growth numbers and the ones one would get from the survey to the fact that some people increase their number of accounts from 1 to >1.

I’m not only concerned about people who deliberately keep two accounts. I would guess that most (or at least many) people who have more than one account have it because of some kind of “accident”. Maybe they weren’t very active with their first account and logged in very infrequently. On some occasion they wanted to log in again but had forgotten the password (or which email account they were using for the fb account), so instead of solving that problem it’s easier just to open a new account.

I’ll keep my eyes open and see whether I bump into any relevant papers or data.

I realized from one of your previous posts that you had older information for a set of countries available in an interactive chart, but i seem not to be able to open it. Do you have a spreadsheet or other document where you store historical data?

let me know your email address and I'll provide you with some numbers for Portugal.